Aksa Energy set up the Framework Environment Management System (FEMS) to execute its business activities in parallel with its environmental policy. FEMS is designed to comply with applicable laws, rules and regulations; outline and keep track of the Company’s environment management objectives and goals and establish an effective environmental management system.

One of the most significant areas of environmental impact within energy generation is air emissions. Aksa Energy regularly monitors and measures the effect of its operations on air quality and ensures that its emissions fall within the legally prescribed limits. The Company makes necessary technological and capital investments to eliminate any adverse impact of the air emissions on the environment and human health.

Waste management is one of the most important components of Aksa Energy’s environmental sustainability approach. The Company conducts research studies to reduce the amount of waste and boost business process efficiency in order to achieve a higher performance level each year. Efforts are expended to improve business processes, reduce resource consumption, and decrease waste generation by using innovative technologies and resources effectively.

Aksa Energy actively works to reduce wastes generated by its power plants at the source and minimize hazardous waste. The Company disposes of wastes in compliance with environmental legislation. Waste oils, contaminated packaging and clothing, suction filters, sludge in oil/water separators and scrap materials are sent to licensed waste disposal companies. Similarly, scraps, sludges, greasy clothing and contaminated and greasy wastes are also disposed of in accordance with applicable laws, rules and regulations.

Some 839 tons of waste was sent to licensed recycling/disposal companies in 2018. Recycling of packaging waste is performed by recycling companies contracted by the municipality in the region where the facilities are located. As part of the waste project at Ghana power plant, a fast closure system is being installed, which will prevent wastes from flowing out of drain pipes.

* Ashes generated at Bolu Göynük Thermal Power Plant were started to be stored at Yeni Güney Regular Ash Landfill and entered into records  as of 2018. For this reason, a significant increase was recorded in the amount of wastes sent to the landfill in 2018.

The amount of water consumed by Aksa Energy has decreased over the last three years in parallel with the reduction in the power generated. In 2018, the Company’s water consumption fell 10% year-on-year. Waste water volume also declined 11% compared to the previous year. 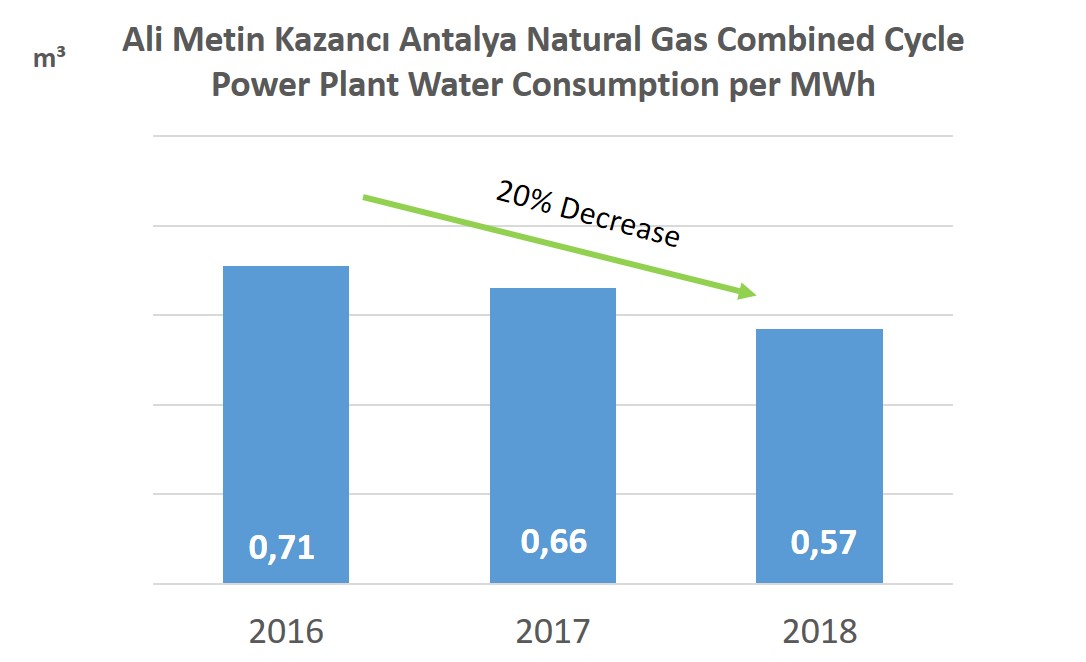 The Company completed a project to collect reverse osmosis waste water in a separate pool in order to humidify ashes. In addition, the Company created Çatak Pond for Bolu Göynük Power Plant; this effort was aimed to meet the water needs of the local community and operational requirements of the plant.

At the Manisa and Şanlıurfa Natural Gas Combined Cycle Power Plants, water treated by the reverse osmosis method started being recycled and reused in the cooling towers. As a result, water consumption declined at these facilities.

The Company has executed a variety of water conservation projects at its power plants in Africa where water resources are extremely limited. Waste water generated by the water softening unit at Ghana Heavy Fuel Oil Power Plant is used in the facility’s grounds irrigation system.

Aksa Energy places great importance on monitoring and protecting the natural life and biodiversity of the regions where it operates. The Company actively supports projects that protect and enhance natural habitats, with a view toward monitoring the environmental impact of its business operations and mitigating negative impacts. In line with this perspective, Aksa Energy initiated partnership with the Association for the Protection of Turkey’s Nature (TTKD) to preserve biodiversity since 2015.

One project to protect mountain gazelles was implemented for two years. In 2017, the collaboration continued with TTKD-Hatay branch under a project to explore the current situation and ecology of the striped hyena living in that region. A study was initiated on the highly endangered wild species of striped hyenas living in Kırıkhan – Gölbaşı Village. In the first phase, interviews were conducted among the local population. The overall goal of the project was to highlight the importance of protecting the striped hyena, located in the upper region of the food chain, and preserving the rich biodiversity of Hatay region.

During the two-month project, photo traps positioned in the landscape captured images of the rock gerbil (gerbillus dasyurus), which had not been observed in the last 22 years and was thought to be extinct. This was an important achievement for both the specialists on the project team and Aksa Energy.

The report titled “Preliminary Study on the Striped Hyena’s Spread and Habitat in the Hassa – Reyhanlı Region” was published upon completion of these efforts. The report pointed to the need for meticulous protection of the local habitats which are rich in local mammals. The study results were published in regional and national media, thereby broadening awareness on the rich biological diversity of the area.

Acting in cooperation with the Turkish Association for Conservation of Nature and Natural Resources (TTKD), a project was conducted in 2018 to determine the presence of red deer (Cervus Elaphus), a species symbolizing biodiversity, around Yedigöller National Park, and their ecology. Protection of red deer, which is listed in the Red List of the International Union for Conservation of Nature (IUCN) and whose population is gradually decreasing, is of vital importance for biodiversity.

When the project was completed, the species' population size, density, distribution, natural habitat, food and nutritional sources, as well as their social behavior and interaction with humans and the threats facing them were determined. Measures were also taken for their protection under this initiative.

Taking an active role to protect biodiversity and adopt a responsible production approach, Aksa Energy plans to conduct efforts in 2019 in Bolu province, one of its areas of operation, to protect the brown bear (Ursus Arctos) – the only bear species and the biggest predator bear found in Turkey. With support to be provided for the preservation of natural habitats, Aksa Energy aims to protect this endangered species. The brown bear is threatened with extinction due to human-driven factors, including loss and fragmentation of natural habitat, reduction of habitat quality in the vegetation cover, and poaching. The project’s ultimate goal is to carry out preservation and awareness-raising activities to ensure survival of the species in its natural habitat and to contribute to scientific literature in this topic area.

To promote the participation of stakeholders in environmental issues and to fulfill our commitment related to the environment, you are welcome to share your suggestions and views with us via enerji@aksaenerji.com.tr.